The determination of the breaking stability evaluates the strength of the stem based on the results of the pulling test and compares it to the expected wind load.

With a pulling test the fiber strain is measured under well-defined loads. Arbostat determines the best linear correlation from the force-strain values evaluating the quality of the measured results by means of statistic parameters. Deviations from the expected deformation will be analyzed and interpreted with regard to the state of the wood body.

Prognosis of deformation with pulling test

Based on Hook's Law Arbostat extrapolates the measured strain until the limit of elasticity of the green wood. There is available a catalogue of standard values for typical tree species. As limit value is defined the point where the deformation stops being elastically reversible and, thus, the fibers are damaged permanently.

Measuring results and evaluation at one glance

The measured force-strain values and the best-fit line are displayed in a chart. As this line displays the behavior of the peripheral fibres under load, the failure load can be derived from it. As a consequence, the course of the line displays the safety margin against breaking. 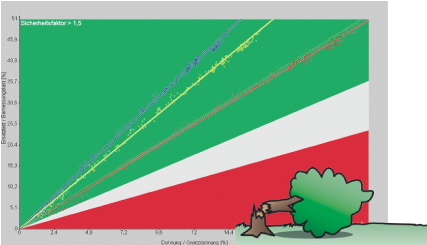