In order to estimate the tipping stability it is examined, how tight the roots are anchored. Restrictions due to damages can be distinguished on the course of the inclination.

The load-inclination values are quite similar with trees at different locations at the beginning of the tipping process. The inclination in the pulling test is compared to the typical curve and is the basis of the estimation.

Arbostat suggests the failure load from a defined limit value on the basis of known correlations. As the inclination behavior disperses considerably more beyond this point, a conservative approach is applied.

Based on the expected impact of wind and the prognosis of the tipping load, a safety estimation is done in form of a chart. With the course of the inclination values can be determined immediately, if the behavior in the pulling test corresponds to the assumptions used for the prognosis. 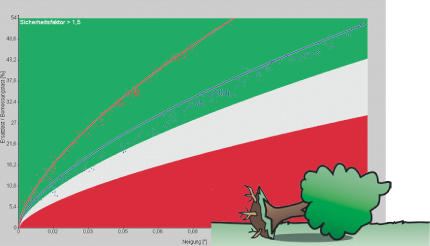